The Dark Prince series is a series of Tolkien fanfiction by Spiced Wine that is written and posted as a work in progress. The first chapter of the first book of the series, Dark Prince ~ Book One, was published in December 2007. So far, the series consists of 11 stories; as of December 2016, Magnificat of the Damned. Book III ~ Fire has been completed, Magnificat of the Damned. Book IV ~ Anvil has been started, and both that and A Far, Fierce Sky are being regularly updated. The total word count for the series so far approaches two million words. Dark Prince Book I was the second most read story, with more than 119 000 hits, on Lord Of The Rings Fanfiction.com, before the series was taken down and re-posted at Faerie, An Archive Of Tolkien Fanfiction in July 2011 due to issues with the purchase of LOTRFF.com as a for-profit site. It is now the most read story on Faerie, with a hit count exceeding 301,000.

Dark Lands and Dark Blood, books II and III of the Dark Prince series, feature chapters written by Anwyn, who tells the story from the PoV of her characters Elphir and Anwyn.

One of the great attractions of the Dark Prince stories is the cast of characters, each of whom is unique and memorable. The enigmatic main character and the dark prince of the title is Vanimórë, slave and son of Sauron, an OC whose life story from earliest childhood onward is told in Dark Prince. Other remarkable OCs include Elgalad, Vanimórë's ward and later beloved; Tindómion, the son of Maglor; Coldagnir the former Balrog, the beautiful Sindarin prince Bainalph, and Edenel, the twin of Finwë, whom was captured in the earliest days of the Elves and taken to Utumno. There, by torture, he was 'changed' although not in the manner Morgoth planned. In addition, Spiced Wine draws deeply from Tolkien's work, and other memorable canon characters include Fëanor, Fingolfin, Maglor, Finrod, Celegorm, Glorfindel, Legolas, Gil-galad, Erestor, Eluréd, Elurín, Daeron, Túrin, Beleg and Maeglin, as well as others. Unlike Tolkien, Spiced Wine explores the entirety of Arda and also portrays rich cultures in the south and the east of Middle-earth.

map of Middle-earth as it appears in the Dark Prince universe, with all the key characters.

Author summary: Vanimórë, son of Sauron, was born in the shadows of Tol-in-Gaurhoth. A plaything, a slave, a warrior, he was bound to his father's mind, and tempered as a weapon of the Dark over thousands of years.

They forged better than they knew.

Trained in the pits of Angband, Vanimórë could command armies, kill without conscience, and he could hate those he served. But he would not break for them. The blood of the Eldar ran strong in him. His path was inextricably linked to some of the most famed and tragic of the Elves, and lead to a destiny he could never have imagined.

The Darkness – has its own Light.

Works in the Dark Prince Series

It was said that Fëanor had little love for his half-brothers, yet Fingolfin followed him to betrayal and, ultimately, to death in single combat against Morgoth. There were many lies handed down through the ages, and this lie covered something so forbidden and irresistible that no law could forbid it, neither could death or doom destroy it. The Arc of Fire, the blazing thread connecting the houses of Fëanor and Fingolfin encompassed three generations and thousands of years. It began in Valinor, in the Years of the Trees.

Lúthien was not the only offspring of Maia and Elf born in the Elder Days, but Vanimórë's tale was never to be sung in glittering halls.

His mother was Elven. His father was Sauron. His birth was accomplished by the blackest sorcery of Morgoth Bauglir.

He was forged as a double-edged sword is forged, as lethal and as beautiful. And they tested him to breaking-point.

He would not break.

After the Last Alliance, Vanimórë traveled deep into the Harad, to the great desert trade-city of Sud Sicanna. He took the throne with violence, slaying the corrupt Sultan; he meant to rule until Sauron took form again and called him back – as Vanimórë knew he would.

Nowhere, even in the South, whose people worshiped Morgoth and Sauron, were women treated so brutally as in Sud Sicanna, almost, Vanimórë thought, as though they were feared. In the temple, overlooked by a statue of Melkor, lay a great stone used as an altar of sacrifice in blood rituals dedicated to the world's darkest, oldest God. The Azanti tribe said that before Men awoke he, whom they named the Black One Whom Enslaves, murdered the Mother of the Earth upon it.

Vanimórë came to know that something had indeed happened in that place, something so terrible it echoed through time. Nothing in Vanimórë's fated life was chance. Something had drawn him to the wealthy, vicious city, something that knew whom and what he was...

Vanimórë journeys south with Elgalad to a rich, corrupt city on the coast of Haradwaith, where an ancient darkness has the ruler under its hand. Death and madness unfold about Sauron's son; he was made Vala in the Bath of Flame, yet this old evil will flee from power, and Vanimórë is forced to endure slavery once more as he seeks to discover what dwells upon the Isle of Plagues.

He came out of Night, but he did not come alone. Now the darkest of powers seek to show Vanimórë that his path was laid before him long ago, and that his destiny is to aid Morgoth's return before the Dagor Dagorath, the Last Battle at the end of the world. If he falls, there is no way back.

Vanimórë's Imperium rises in the south, bringing order in the wake of conquest, and beyond it's might the Re-united Kingdom thrives in peace. Gil-galad returns to Lindon with a youthful Fëanor who has his own power and destiny. Yet an evil undermines Vanimórë's rule, and taints the kingdoms beyond. His subjects believe their Emperor demands blood sacrifice and name him the Dark God. And at the end there will be sacrifice indeed, and a breaking of the heart...

Tears unnumbered they would shed, yet still they would live, and love and defy Darkness. And they would die. Yet as Fëanor prophesied, their deeds would “be the matter of song until the last days of Arda.”

The Arc of Fire, the blazing thread of forbidden love and desire which began with Fëanor and Fingolfin spanned three generations and thousands of years. I Will Lead and Thou Shalt Follow told of the birth of that passion. This story continues the Arc, telling of the ultimately doomed love between Fingon and Maedhros, Fingon's son Gil-galad and Tindómion, son of Maglor, in an Arda where the love of one's own gender was seen as an offense in the eyes of the the Valar – and punished by banishment into the Everlasting Dark.

Glorfindel and Legolas talk to Finrod, Glorfindel's elder brother, in Valinor before the Noldor sail to their new haven in the east of Middle-earth.

At the end of the Third Age, Glorfindel and Vanimórë, son of Sauron, are the supreme Powers on Arda, having passed through Fos Almir, the Bath of Flame. The mighty dead have returned, and Glorfindel leads the Noldor to a haven in the east of Middle-earth, which they call their New Cuiviénen. Fëanor, released from the Void, will rule there as High King.

But the ancient loves, hates and feuds of the Noldor have not dimmed or been forgotten with the ages, and their new life becomes a tinder-box of passion, pride and power. Ancient dooms and betrayals arise, and both new and ancient notes of the Great Music are played across the Fourth Age of Arda.

Reborn into an older world and freedom, they had discovered that the jealousy of Gods does not fade, and that damnation has an agelong reach. In dark Angmar, the Mouth of Sauron feeds his ambitions with unspeakable acts. Coldagnir the Balrog begins to learn what freedom is, and in New Cuiviénen the Noldor battle with their own pride and passions.

Thousands of years after the destruction of Old Earth, Sauron, with Ungoliant, is welcomed into Valinor, to make the Halls of Waiting a place where souls are devoured. The ruling Valar of Aman wish to use her to lure Vanimórë, Glorfindel, Fëanor and all those they call the Rebels to uttermost destruction unto the very dissolution of their souls.

But thus do the Gods forge weapons; with hammers of pain and sacrifice – and the fires of undying love.

A collection of smaller ficlets written in response to the Silmarillion Writers Guild Back To Middle-earth Month.

What would have happened had Legolas not been able to flee to Imladris and Glorfindel when he found he was pregnant? What if he fell into entirely different hands?

After the Last Alliance, Vanimórë, freed for a time from Sauron's control, made himself the ruler of Sud Sicanna, a wealthy city in the Harad. Five hundred years later, he journeys to Szrel Kain on the Sea of Rhun where rulers of the East are meeting to discuss renewing their attacks upon Gondor. Vanimórë goes to gather information, to keep his finger on the pulse of events.

Legolas, banished from his home, wanders into the hands of a clan traveling back to Rhun after a summer of trading. The Men, afraid he will bring ill-luck on them, mean to sell him, and in lands where the Dark Gods are worshiped Legolas' uniqueness would mean sacrifice, the death of both himself and the child he bears: Glorfindel's son.

He falls instead into the hands of the Dark Prince, the son of Sauron, who understands neglect and abuse only too well...

Following on from events in A Light In The East, Legolas continues his journey south with Vanimórë, Maglor and the warriors of Sud Sicanna. Sauron hopes to separate the young prince and his son from Vanimórë, and continues to hide behind his assumed identity, and unbeknownst to him, the Mother's concealing power.

Further north, Glorfindel travels with Tindómion, and Legolas' brother Celeirdúr, with Bainalph, the Beautiful Swan. Thranduil, knowing he is acting unwisely, nevertheless sets out on his own, with, he believes, one aim in mind.

All are unaware of the power and love that links them one to the other, and what, in the end, it may come to mean.

This is their journey to A Far, Fierce Sky. 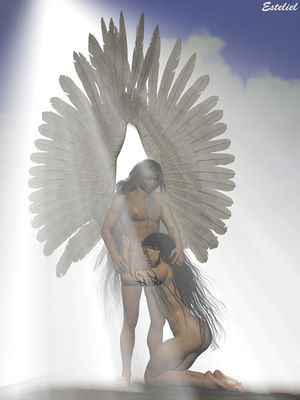 Several fans have written stories that take place in the Dark Prince universe or use its characters:

Remembrance Of Days To Come.

A crossover between Pink Siamese's