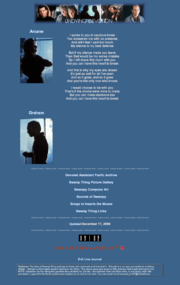 This site is documented here as part of the OTW's GeoCities Rescue Project.

Graham: You'll never be rid of me, Sir.

Songs to Inspire the Muses

A beautiful song that I think represents Graham's devotion perfectly.

Inspires the question of Graham's background. What led him to Arcane's employee, what choices did he have to make?

If Graham ever wised up and realised the truth.

How long can Graham take life with Dr. Arcane?

A beautiful song that I think must capture Graham's feelings about Arcane perfectly.

How I imagine Graham feels as he watches Dr. Arcane date his countless women.

A sad and depressed Graham after he's been insulted (time and time again).

Yup, that sums up Graham ... Never Wanted Anything so Bad ;)

Inspires the Muse of ActionGraham ... who finally leaves and gets a real life.

Graham being realistic about his obsession with Arcane

A muse inspiring song, which may never get written.

I know it, and you know it. Only Graham is always there for Arcane. Now, why doesn't Arcane know it.

Inspiration for a story I'm working on. Appropriately called 'All That You Can't Leave Behind'

For once, this song seems to work for the love between Arcane and Tatania.