What Fandom Racism Looks Like: The Smartest Girl in the World Has To Be A Mary Sue

The essay deals with many fans' reaction to the character of Shuri from the Marvel Cinematic Universe film, and specifically her being labelled as a "Mary Sue" for being a 16-year-old genius princess who leads the scientific development in her nation of Wakanda. Stitch discusses why fans dismissively labelling Shuri as a Mary Sue when they are happy to accept the intelligence of white male geniuses such as Tony Stark, Bruce Banner, Sherlock Holmes and even Peter Parker - who is the same age of Shuri - is a sign of entrenched fandom racism that needs to be called out for what it is.

She also talks about the history of brilliant Black characters in Marvel comics, such as Lunella Lafayette and Riri Williams - not to mention T'Challa himself since his creation in 1966 - many of whom are or were introduced as teenagers, something which critics of Shuri's existence in the MCU don't tend to mention. 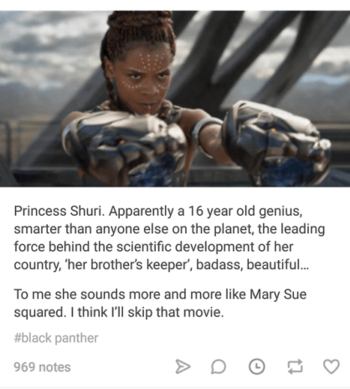 The original Tumblr post which labelled Shuri as a Mary Sue

Some Excerpts From the Essay

On the first day of Black History Month, a random writer on Archive of Our Own gave to me… two separate stories that framed Shuri – T’challa’s brilliant baby sister in Black Panther – as a character that couldn’t possibly be as smart as the MCU claims and as a victim of child abuse by the Wakandan elite who are “taking advantage” of her brilliance.

These stories were written in response to Black people calling out the author’s racism in deeming Shuri a Mary Sue in Black Panther in a tumblr post (that used the Black Panther tag) and subsequently writing off the film.

I’ve been in fandom for most of my life and I don’t think that I’ve ever heard anyone use the term “Mary Sue” as anything other than a pejorative to negatively describe a female character that they’re currently insulting. Despite attempts to reclaim the word in some fandom spaces, chances are that if someone calls a character a “Mary Sue”, they really don’t like the character they’re talking about.

Mary Sues are, at first glance, female characters that get everything. That great luck – in romance, in fighting, in family – is what makes fans loathe the Mary Sue. They purportedly read as the author inserting themselves into canon by way of fanworks and that is a big problem for folks that hate the Sue.

Straight up, I think that the go-to urge for predominantly female[1][1] fans to use the term is one born out of at least a little bit of internalized misogyny. It’s a term specifically used to insult female characters who appear to have it all – especially the attention of a popular male character. What else could it be?

Which brings us to the “fandom racism” element:

Most Mary Sues are white original female characters who are often literally self-inserts in stories where they find love with a canon male character or are biologically related to/adopted by a family in canon. It’s rare to see someone describe a canon female character as a “Mary Sue” in reviews or commentary of a work unless it’s something chock full of internalized misogyny…

Or if the character in question is not white.

Second, Shuri being the smartest person in the MCU at sixteen isn’t anything close to a problem. It’s not like she’s the first Black teenager in the genre to be brilliant and a badass.

Superhero comics actually have a history of having brilliant Black characters dating back to Black Panther himself back in 1966 and many of them were introduced as teenagers.

Hell, in the current 616 universe, not only is tweenager Lunella Lafayette literally the smartest person in the world in Moon Girl and Devil Dinosaur, but another brilliant Black teenager is Iron Man’s successor Riri Williams. One of the few things that Marvel does awesomely is have these Black girls with big brains running things.

Sherlock Holmes and Sheldon Cooper are two examples that Collins gives,[2] but then there’s Batman/Bruce Wayne, Iron Man/Tony Stark, and I mean literally dozens of other white male characters whose genius is assumed to be both natural and relatable despite the fact that well… no one else’s ever is.

What makes Shuri more unrealistic than Tony Stark or Peter Parker? Both characters have been/are child geniuses in the MCU and Peter is in fact the same age that Shuri currently is.

No, all the ire fandom has for brilliant characters in the MCU is saved up for Shuri.

And don’t get it twisted now, this is entirely because Shuri is a Black character described as being smarter than Tony Stark. This all ties into the fact that Black excellence on the scale of Wakanda frightens and angers non-Black MCU fans despite the fact that it’s a fictional country.