Underwater Light is a epic-length Harry/Draco slash story by Maya that was posted online in installments between May 2002 and July 2005. Written from Harry's point of view, the story takes place during his seventh year at Hogwarts and imagines how he and Draco Malfoy might become friends. Their evolving relationship is set against the backdrop of the looming war with Voldemort. Because part of the story was written during the Three-Year Summer before Order of the Phoenix was published, it presents a now thoroughly jossed sequence of events leading to the final showdown between Harry and Voldemort.

The story combines elements of the romance, mystery, and action genres.

Maya wrote a few other stories set in the same universe:

Underwater Light, along with Maya's other fics, was taken offline in November 2008 when Maya went pro. Copies of the story can still be found online.

The story received attention outside fandom when it was listed as one of the top four "must read" Harry Potter fan stories by Time magazine in the summer of 2011.[1] 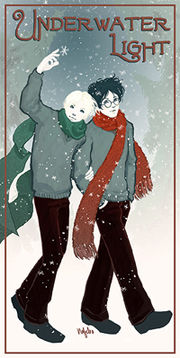 Fanart for the story by nefeleo, depicting the scene in chapter 11 where Harry and Draco go for a walk in the snow. Additional art and graphics inspired by the story are below

The title of the story refers to a scene in the first chapter, when Harry, again a champion in another Triwizard Tournament held in his seventh year, must rescue Draco from the Lake in the Second Task; he is struck by the image of underwater light reflecting off an unconscious Draco. From this point on, Harry sees Draco in a new light, so to speak.

After the Second Task, Harry decides to befriend Draco in order to find out why Draco was selected as the one person he would "sorely miss." A major factor in Underwater Light's appeal is the bucketloads of UST in their budding friendship. Neither Harry nor Draco realize until late in the story that 1) Harry is gay or 2) that he is in love with Draco. However, as Harry's personal drama unfolds, Hogwarts students are being abducted by a mysterious spy; naturally, everyone suspects Draco. Eventually, the spy is revealed, Harry defeats Voldemort, and Draco gets over himself.

Maya's treatment of Slytherin characters is an example of resistant reading (or a Slytherin apologist). Through the development of Draco, Pansy Parkinson (especially in Loved Those of Great Ambition), Blaise Zabini, Crabbe, and Goyle, Underwater Light demonstrates how the books' representation of the Slytherins as the "evil" house might be due in part to the bias of its point-of-view character (Harry).

Both Harry and Draco are presented as emotionally maladjusted, but in different ways. Draco's characterization shares many elements with Cassandra Claire's LeatherPants!Draco, but he is not as well-adjusted. Harry's characterization is a little uneven; initially he is presented as depressed and self-pitying, but later chapters also emphasize a (non-canonical) violent streak. Harry's characterization also reflects a general fannish criticism of the source text: that someone raised in a closet should display more psychological damage than the canonical Harry does.

Underwater Light is probably Maya's most well known fanfic. Some fans consider the first chapter to be a bit slow or Draco to be portrayed as too perfect, but general fannish consensus is that the story is awesome: It was extremely popular in the Harry Potter fandom and was rec'd far and wide while still a WIP. Fanartists were also inspired to illustrate various scenes from the story.

Maya's interpretation of Draco has had a huge influence on his characterization in HP fanfic at large. One reviewer writes:

I have to say that Underwater Light has been one of the fics that has most shaped the face of fandom for me. It's had me hold my breath at times, in tears at others, and busting a gut with absolute laughter at others. If anyone ever wonders who made me look at Draco quite so differently than how JKR portrays him, the answer is Maya.[2]

Finished Underwater Light. I feel like crying. All the feels! It was amazing. I don’t really know what to say… But it was a fucking good read, it really was. What to read next? What can follow that?"[3]

Should I finish Underwater Light? I’ve read half of it, months ago. I had to stop because OH GOD IT HURT, IT HURT. I would read a couple pages, put the ereader down, sob, then pick it back up again. I know it had a positive ending because I cheated and looked on fanlore.org. I want to read it because it’s a classic, something every Drarry shipper should read, but I don’t want to read it because I’m afraid it will devastate me so much all over again. Should I? And if yes, should I start from the beginning again or pick up where I left off?"

de-jadis answered: "Definitely finish it! It is devastating, but in a very beautiful way, and it’s well worth the time and tears. :)"

legolasleto answered: "Start from the beginning and finish it! It’s really worth it in the end. But it most likely will devastate you again just have tissues ready!"

sexyslytherin1998 answered: "Read it from the beggining it’s amazing!!! And just finish it! It’s not a classic for no reason!"

with-her-smile answered: "Finish it! i know its hard, and so angsty:( but the ending is sooooooo worth it. And start from the beginning to get the full affect." [4]

Although i’ve read it like million times already (and i HAD to print it to have it always close at hand), i will never get tired of Underwater Light. and i will never forget my mum’s face when i’ve used all the paper that we’ve had in our house for printing it. EPIC. xD and now i’m going to my bed and i’m gonna read it again. no regrets."[5]

Downloaded “Underwater Light” by Maya…OMG WHERE HAS THIS BEEN ALL MY LIFE?? Why haven’t I heard of it before now? Its absolutely amazing! I love how the characters are still in character; you don’t see much of that in ff."[6]

So I may have literally just thrown a small tantrum over something that happened in a fanfiction. But goddamn it, Underwater Light is infuriating me. I mean…I like it, I think, but I spend most of my time wanting to punch the characters in the face."[7]

I don’t care what anyone says. Underwater Light is the new canon."[8]

Artwork Inspired By The Story

Underwater Light inspired — and continues to inspire — much fanart in a wide variety of styles, both digital and traditional. Some art illustrates particular scenes from the story, but the inspiration for many pieces, especially the character studies, is less obvious and may only be evident from the artist's giddy notes extolling the virtues of the story. Many readers fell in love with the "wicked trio" (Draco, Pansy, and Blaise), and some expressed their love through art. But much of the art consists of Harry/Draco scenes.

In 2005, takenoko posted the first chapter of Underwater Light to fellytone_fic.[10]