Turn That Frown Upside Down, or, "I am NOT a Merry Fan"

Turn That Frown Upside Down, or, "I am NOT a Merry Fan" is an essay by Mary Jo Fox. It was printed in Blue Harvest #5, a zine in which she was one of two editors. 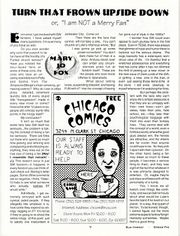 Do you ever wonder why cons that purport to be fun have all the frivolity of a Puritan church service? Have you noticed the dour-faced fans at some of these cons, the ones who beat an uncanny resemblance to Patty and Selma from The Simpsons (Marge's chain-smoking, grimacing sisters)? Why do I see in other zines detailed, vehement laundry lists of every stupid little "transgression" made in every new novel or comic? I How come after 12 years or people still criticize dumb little points in the trilogy itself?

It isn't so much that some fans take SW itself too seriously... the problem is taking the concept of being a fan I too seriously. There are folks I out there who spend so much time picking and whining and complaining and criticizing everything, they miss out on the true joys of being a fan. This doesn't occur in just SW fandom — it happens in every fandom you can think of. Just check out Starlog's letter pages. Some of the comments I are so negative, I think, "Geez, I'd hate to see what someone I who actually loathes ST would write."

Admittedly, I get extremely annoyed with such cynical, jaded people. It they allegedly like whatever it is, how come they expend so energy ragging on it?! It's not as if they're going to re-shoot the entire trilogy at this point just to satisfy one malcontent in Jerkwater City. Come on!

But perhaps the problem with the fans who can't enjoy life's simple pleasures is that they are so unhappy with their own lives — can't get dates, hate their jobs, hate school, etc. — they take their psychological baggage with them into even their fantasy lives. They cannot deal with the concept of a world, even a fictitious world, where the good guys always win, the heroes are attractive, and the villains are far cooler than anyone could hope to be. So they pick it apart with their cynicism. On the other hand, being a fan may mean so much to these people, it becomes a serious thing to them, and they lose sight of the fact that whatever it is was primarily designed to entertain. Or, maybe they're just drips and flakes with all the personality of a turnip.