The Society for Slash Diversity and The Committee of Chekov Obsessives Comparing Historical and New Narratives in Ensign Literature is a website that archived both the fan fiction of Karmen Ghia and a series of interviews she did with slash fans during the late 1990s and early 2000s.

From the website: "April 29, 2009: Well, Geocities is closing sometime this year, so the whole Karmen Ghia CC SSD HTRR whatnot shootin' match is over at the original Tripod home. Long live Tripod! I hope. Karmen. PS. This really IS the last update here. Hochofedra. Live long and prosper." 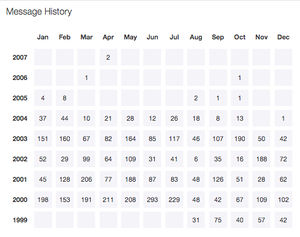 This community of fans had a mailing list: COCO_CHANNEL; archive link that was created July 26, 1999. It was active until about 2004. The listowner was Karmen Ghia.

"The Committee of Chekov Obsessives Comparing Historical and New Narratives in Ensign Literature and, back by popular demand, her sister group, The Society for Slash Diversity. Star Trek slash and discussion. An emphasis on Chekov now and then but everyone is welcome. By subscribing to this adult list you automatically admit, affirm, avow, etc. to being of the legal age of consent in your locality, or you would not be subscribing to this list, right?" [1]

Another description: "The COCO/SSD mailing list. This list is a haven for Chekov fic, S/Mc, multiple pairings and unusual pairings, both slash and het in TOS."