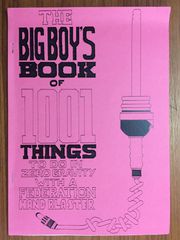 The Big Boy's Book of 1001 Things to Do in Zero Gravity with a Federation Hand Blaster is a slash Blake's 7 22-page anthology. The art by Jean Sheward. Includes limericks, and the Servalan filk "Mistress of the Universe," which was recorded by Linda Short on one of her filk tapes.

Neither Love Nor Money Avon finally tells Blake about Anna Grant. Since the story was written shortly before _Rumours of Death_ was first screened, it bears no relation to canon. It's still a good might-have-been, with a plausible explanation of the backstory of Tynus and Avon. Well worth reading, even if it's now wildly AU.

Licence Allegedly the first slash story written in B7. And it's a Tarrant/Jarvik! An explanation for why Jarvik thinks Tarrant is a Real Man, and a neat suggestion as to how and why an FSA graduate came to be a mercenary.

Food for Thought Vila goes on a shopping trip and brings back a dragon. The preferred diet of dragons is freshly killed human virgin, which leads to much fun and games as we find out who does or doesn't qualify as dragon dinner. Yes, it's silly. I still liked it.

A very slim zine at 22 pages, including a couple of pages of limericks and poetry as well as the above, but a lot of fun. Recommended. [1]

The title of the zine appears to have been taken from its single Tarrant story: "License." Told in the first person, naive cadet Del Tarrant comes to the attention of one of his FSA instructors. Captain Jarvik tutors him in a subject that is definitely not part of the normal FSA curriculum. During a test flight with only the two ofthem on board, Jarvik manipulates the situation so that they are stranded in zero gravity where they further explore their mutual attraction. (Did they really do what I think they did with that Federation Blaster?) At the end, we learn to whom Tarrant was telling his story and under what circumstances.

The zine contains two other stories with a humorous bent. One features A von and Anna. The other focuses on Vila. The entire zine was written by Oriole Throckmorton. Nothing fancy about this zine, just good, clean fun. It's out of print and may not be easy to find. [2]