Return from the Glass Isle: The Romantic Structure of Star Trek

Return from the Glass Isle: The Romantic Structure of Star Trek is a 1977 essay by Jane Aumerle.

It was published in Menagerie #11 where it has illos by Monica Miller that are very reminiscent of her art in Interphase. 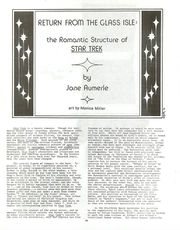 a page of this essay as it appears in "Menagerie" 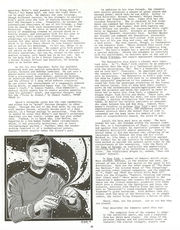 a page of this essay as it appears in "Menagerie"

This essay was quoted in Romantic Myth, Transcendence, and Star Trek Zines.

Star Trek is a heroic romance. Though its incidental dental props -- starship, phasers, subspace radio and the like -- place it firmly within the more specialized category of science fiction, its nearest literary relatives are such works as the Song of Roland and the Morte D'Arthur. Each episode of aired series, and much of fan-written fiction, faithfully reproduces the classic romantic pattern of agon (conflict) , pathos or sparagmos (climax) and anagnorisis (recognition). However realistically played or developed, Star Trek's characters and situations are archetypal and function accordingly. In the history of a form which dates back over two thousand years, only the names have been changed.

To be morally valid, his choice must be unforced. The Enterprise never came to Armageddon; but Kirk is faced with precisely equivalent decisions in "Ballance [sic] of Terror," in which the future of the Federation may depend on his actions, and in "The City on the Edge of Forever," which requires him to restore the history of his entire universe to its proper course. "Nebula of Orion"by Gerry Downes deals with the same conflict, but on a personal level. This excellent novella brings the ship and her captain into direct confrontation with an enormously powerful and destructive intelligence; the Enterprise's survival is contingent upon Kirk's unequivocal rejection of Orion's offer of practical godhood. In this case only Kirk can make the neces sary decision; in the other two, only he can make the choice unconstrained. Kraith is, in this connection, the exception which proves the rule. In these stories, Spock takes precedence because they are concerned primarily with Vulcan society and culture. His position as Kaytaytikh of the First Realm, and his elevation to head of the Guardian Council in "Spock's Argument," are not so much evi dence of the authors' infatuation with the character as they are structural necessities of the genre.

Spock shares many of Kirk's virtues: he is loyal, unselfish, brave. His intellectual abilities are of an extremely high order: he can literally think about two things at once; he.is proficient in a number of branches of science. Yet he rarely beats Kirk at chess, and is completely without the Captain's gift for leadership, as the fiasco of "The Galileo Seven" demonstrates. However, far from being disturbed or moved to jealousy by his inability, he is content with his secondary role. The alternate Vulcan of "Mirror, Mirror" states flatly, "I do not desire the captaincy"; in "I Need You, Baby," (from M. L. Barnes' A Handful of Snowflakes) the "true" Spock says, "Cap- tain...if it's all the same to you, I'd prefer to go on serving as your First Officer." He is nonetheless unsurpassed in his own areas of competence. As Lancelot is Arthur's truest and best vassal, so Spock, according to both Kirk and McCoy, is "the best First Officer in the Fleet." Only an exceptional leader could gain and hold the loyalty of one who is himself so greatly gifted.

One further development is possible in romance. Aired Star Trek never carried the genre to its ultimate conclusion, and to the best of my knowledge, only one piece of fan fiction has done so. ALTERNATE UNIVERSE 4, by Shirley Maiewski, Anna Mary Hall, Virginia Tilley and Daphne Hamilton, deals with Kirk's court martial and dishonorable discharge from Starfleet (ritual death), and his subsequent career as an "Action Agent" for the Velonian Light Fleet. The latter is a secret, highly advanced and immensely powerful organization dedicated to the preservation of peace in the galaxy. It is head quartered at Indel, a beautiful city occupied by agents of various species, including Klingons and other warlike peoples; and by their superiors, ageless beings whose children are created directly from parental energy--for them there is no marriage or giving in marriage. Indel, in short, is Heaven. Or, in terms of the Arthurian mythos, Avalon, where the King lies sleeping until the hour of his people's greatest need, when he will once again come forth.