My Parental Units Invaded the Earth, and All I Got Was This Lousy Tee-Shirt 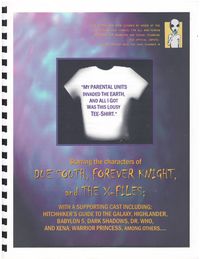 My Parental Units Invaded the Earth, and All I Got Was This Lousy Tee-Shirt is a gen anthology of crossovers. It is a novel of 105 pages and has 31 chapters. The tag line is "THE MOTHER OF ALL CROSS-UNIVERSE 'ZINES" and the crossovers involved included (in the main) Due South, Forever Knight, and The X-Files, but also included Hitchhiker's Guide to the Galaxy, Highlander, Babylon 5, Dark Shadows, Doctor Who (original), and Xena: Warrior Princess, among others.

The anthology is a Teeny Gozer Production, edited and published by Celeste Hotaling-Lyons.

The fanzine started life as a round-robin on a private list of fanfiction writers known as "The Salon." On a challenge, the first writer came up with an X-Files/21 Jump Street crossover, then another threw Forever Knight into the mix, and another wrote a chapter adding some Due South characters, and so on.

Some chapters make sense as direct parody or meta, others are Badfic with misspellings and poor grammar, and still others are Crack Fic. A character named "Mary Sue the Silver-haired Witch" is introduced only to be killed, and an entire chapter is devoted to her fabulous funeral. Several chapters were devoted to time travel as an excuse to introduce Xena and Dark Shadows into the novel.

The writers were referred to as "co-conspirators". The pen-names below protect the good names and reputations of some of the better-known fic-writers in fandom at the time.