In 2015, Star Wars fans were anticipating Star Wars: The Force Awakens and began speculating on their favorite pairings. A few fans remembered some of the deleted material from Return of the Jedi and created a Tumblr gifset using the footage to discuss the history of the Han/Luke pairing. By Dec 29, 2015 it had over 60,000 notes.

This lead to a wider discussion among fans about Star Wars fandom history, and why the Han/Luke pairing hadn't been as prevalent as one might have expected.

"Star Wars: Return of the Jedi (deleted scene) Seriously though, this scene. WHY DID THEY DELETE THIS SCENE?"

In response to the first gifset, astolat reblogged it with the following comment:

"And as they went away with Luke letting Han’s hand trail out of his, I thought, “…as though millions of Han/Luke shipper voices suddenly cried out and were silenced.”[1]

A few months after the combined sets of gifsets began circulating, one fan attempted to provide historical background on the Han/Luke pairing:

"True story from ancient fandom corner: people did ship it, and that shit was stomped on harder than any slash has ever been stomped on. There were lawsuits. SW slash went WAY underground–even in the days when all slash was underground. There were ‘zines, but they were precious as carbuncles and basically if you had one or wrote in one you were like a fucking badass slash bandit." [3]

And later, another fan claimed that:

"True fact: Lucas films actually sued fans in the 70’ for publishing slash and gen fiction. I remember fanzines in the 80’s-90s would not touch Star wars with a fifty pole."[4]

Many of the new Star Wars fans on tumblr had no way of knowing that these posts were largely myths. Still, the added statements pushed the reblogs to even higher numbers as fans mused about how acceptance of slash pairings had evolved over the years (see Reactions below).

"No fan was ever sued. But there were stern letters sent.

There were many many Star Wars zines published in the 70s and 80s:

And finally in the 90s, slash zines:

From Fanlore, the fan run wiki:

“…At the time of the first movie’s release in 1977, Star Wars fandom grew rapidly, with fan clubs,zines, and fan-run conventions…… [Fan] Clubs were not restricted to the United States: both theMoons of Yavin Fan club in England [2] and Maikel Das’s Northern German Star Wars group [3]located in Hamburg [4] sprang into existence and operated for many years, producing both fanzines and art. ….

…… the editors of the Star Trek fanzine Sol Plus advertised for new submissions, saying: “…and please, Star Trek only, no Star Wars!” This showed that Star Trek fans were increasingly writing Star Wars material, and sending it to Star Trek editors for publication. [7] By 1979, however, Star Wars was being recognized at fan run conventions and the first FanQ awards were given to Star Wars fans: Maggie Nowakowska for her Star Wars stories the Thousandworlds Collected series, and Martynn, who illustrated Star Wars stories.[8] In 1980, the annual convention for fanzine producers and readers moved from Michigan to New York for one year. “The name, Mos’ Eastly Con, showed the growing influence of Star Wars. Organizers evenly split the panels between Star Trek and Star Wars; the remaining panels covered general topics (such as "the art of editing”).“[9] Star Wars fanzines and other fan works continued to be published through the 1980s and 1990s, with interest in the fandom waxing and waning over the years, often timed to the release of a new movie."”[5] 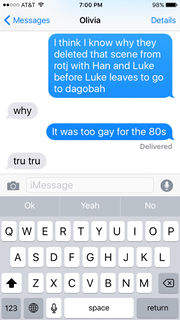 "from what i understand, the phantom menace brought star wars slash into the fannish mainstream, when qi-gon/obi-wan exploded onto the internet ca. 1999-2000, and it was a big enough phenomenon that lucasfilm didn’t bother pursuing it anymore."[6]

WHY DO THEY EVER HAVE DELETED SCENES THEY’RE ALWAYS SO BEAUTIFUL AND PERFECT!![7]

"The most illegal shipment of Han Solo yet."[8]

"Because the gay was Too Strong.[9]

" rewatching all the original movies and LET ME TELL YOU between this and them, bisexual crush-on-Han Luke is my permanent headcanon from now on"[10]

"Revive it, I say. We’re stronger than them now.

"Keep in mind of when this was too - the original trilogy came out between ‘77 and ‘85. You know what else came out in that time? The AIDS epidemic. At its absolute height. (I lost a family member to it in the very early ‘90′s and I remember how quietly the fact of how quietly the fact of he died from AIDS was discussed. I was maybe 5-6 years old.)

I think the fact that they silenced some of the undertones in Star Wars, anywhere from this and just its general forward thinking, set us back a few decades. Star Wars was and is a cultural phenomenon. It sends messages trickling down through generations.

The message shouldn’t have been “Science fiction in future still fears same sex anything that doesn’t have to end in sex,” it should have been “We got through it.”

"They deleted it because they couldn’t get the sound right on set and dubbing it in later wasn’t working either.[15]

"Did anyone see the first movie? They get married in the end scene. John Williams was sly and even made the music very similar to the wedding march. That’s why Chewie didn’t get the medal, even though he was Han’s co-pilot. The medal is the equivalent to the wedding ring in the SW universe."[18]

"When I first saw this the gifs weren’t all the way loaded, so it had all the dialogue except it ended on “I’m thinking…” and Luke just standing there with his eyes closed. Kinda feel it was actually better that way."[20]

"are you saying that shipping han and luke makes us rebels?"[21]

"Their hands people, have you seen how they hold each others hand?! It’s beautiful…"[22]

"I would have rotted in prison [for shipping these two]."[23]

"Wow, how have I never seen this and why was it cut? Also, more power to queer people forcing better representation via fanfic, but I am 100% in the camp of Luke Skywalker Ace/Aro Jedi Knight. I’ve yet to see a portrayal of him in a relationship that felt like he was remotely interested in despite reading a ton of Expanded Universe stuff in my youth."[24]

"Legit thought this was a incredibly high quality cgi work to make Hamall and Ford look younger and it’s some kind of a flashback scene from the new movie. I’m so paranoid about spoilers…"[26]