From Fanlore
(Redirected from D.S.V)
Jump to: navigation, search

You may be looking for D.S.V.-2, the Blake's 7 fiction club zine for the Australian club, "The System."

D.S.V. is a gen Blake's 7 anthology with three issues. 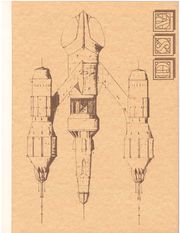 This zine focuses on the Liberator and Zen, including myriad short, funny pieces, generally of a satirical bent. Hotaling-Lyons has a somewhat bent sense of humor, and if that describes you, this zine would be a good purchase. I personally enjoyed it a great deal.

"The Bridge" by Sophia R. Mulvey. Avon decides to find out once and for all what makes Zen tick, and Zen doesn't like that very much. "...+Failure to cease invasionary tactics will result in damage to the intruding unit.+"

"Maps and Legends" by Shoshanna. My favorite of the serious stories by a long shot. The characterizations and dialogue are exceptional. The plot involves the crew of Liberator returning to the System in order to find more information on Zen's functioning before anything else happens that they don't understand. At the same time, Cally reminds Blake of the slaves held by the System, and his obligation to them, giving a nice moral conflict to chew on. My only complaint was that it ended too soon.

"A Different Reflection" by Sheila Paulson. A crossover (spoiler alert) between B7 and classic Star Trek. Not much happens, though she does propose an interesting alternate universe idea. (I happen to prefer her Quantum Leap/B7 crossover in Oh Boy!)

"Dreams of the Jester" by Jon Manzo. This is a Vila story, with an unflattering portrayal of Tarrant. Vila is having a recurring dream about Star One, having to do with a decision he made.

"Raising Hell or Children of Auron-Shut Up!" by Celeste Hotaling-Lyons. I found this story hilarious. The third series crew visits Kaarn and learns that one of the new babies is Servalan, Jr. Many merry mix-ups ensue when they have to care for the fractious tot.

"Casablancaworld" by Catherine Siemann. Like it sounds. Quite funny. [1]

Thankfully, I only borrowed a copy of DSV zine for reading. I can only comment that this is the sort of first effort that a fanzine editor looks back upon in 10 years with extreme embarrassment and zine readers look back upon immediately with regret. A good deal of the content seems to consist of editorial spite against fan individuals she does not like, seemingly oblivious as to whether or not the buyer knows whom she is attacking, or cares. Few of us have an appetite for a spite zine. More seriously, there is a serious paucity substance or content, either in art or story. Bouyed up by a plethora of borrowed humor, derivative wit and the thinnest of narrative threads, this zine sort of ambles along aimlessly for a hundred pages before fizzling. Oddly, the editorial boasts of great achievement in the midst of this disappointing effort. Save the moolah for something more substantive, like a fat, juicy GAMBIT, a lavishly illustrated ZEN AND THE ART OF REBELLION or an absorbing STAR ONE. [2] 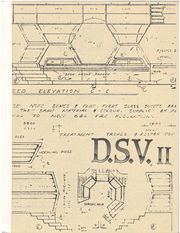 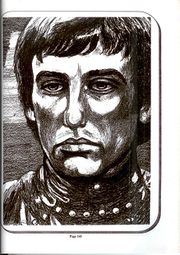 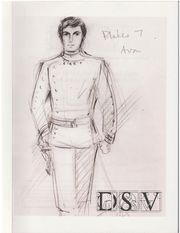 This is a light-hearted zine-- not entirely humor, although there's plenty of that, but even the serious stories are upbeat ones. Like its predecessors, it's beautifully designed; and no wonder, since the editor is also an artist.

There are lots of fun things here, but IMO the very best of all is "Liberator Gardens." Utterly wonderful, even for people like me who know nothing about gardening! The review of Sevencyclopedia reminds me of an alleged early review of Lady Chatterley's Lover, which complained that it was sadly inferior to Practical Gamekeeping. Dayna tells how to kill pests, Cally explains the making of a proper compost heap, Tarrant reviews lawn mowers, Kerril introduces "tender charmers," and Sarkoff has a column on "Back to the Fuchsia." Avon and Vila offer trenchant advice on various matters to all and sundry.

And then there's this little item, from Meegat's column on "Delectable Vegetables:"

"Parsnip Avonresister Firm fruits of a good length. Resistant to canker, its succulent white flesh will become sweeter and better flavored after a period of cold storage. Can be pulled from late May. Highly suitable for exhibition. Fine smooth skin."

Oh, the images this description evokes! I could swear there was also something about a variety of potatoes with beautiful white skin that bruises easily, but I can't seem to find it now. Wishful thinking, perhaps. [3]