A Time of Death, A Time of Life and A Matter of Survival

A Time of Death, A Time of Life/A Matter of Survival is a gen Star Trek: TOS 96-page collection of two novels. It is a flip-over novel; turn it over to read the other story. 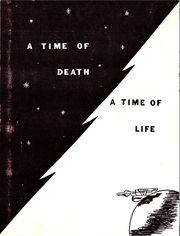 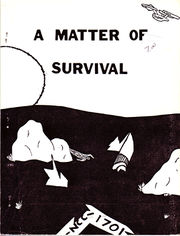 The interior illos are by Jane Dusek and Beth Lentz. The covers are by Beth Lentz and Jane Freitag.

The authors note that "A Matter of Survival" took almost three years to write, and "A Time of Death, A Time of Life" over a year.

From Datazine #1: "Two very different views of the Enterprise and, more precisely, her Captain, are presented in this zine. Each story is so diverse, about the only similarities between them are their characters and their length. You will find this zine even printed in a different manner."

From Scuttlebutt #15: "ATOD/ATOL concerns what happens when the Enterprise and some of her best officers are destroyed out from under Kirk. AMOS finds Kirk on an uncharted world, facing dangers from the elements and aliens alike."

From the Author's Introduction for "A Matter of Survival"

This story is dedicated to Captain James T. Kir, the only true greatest hero ever created -- the invention of Gene Roddenberry; brought to life by him and the many millions of fans who thrived on the courage and compassion that was Kirk's. This is not to take away from any of the other famous characters in our STAR TREK universe. They all deserve great praise in their own right.

But to clarify a certain aspect upon which my story is about to embark, I would like to dedicate A MATTER OF SURVIVAL to all those true "Get-Kirk" fans out there who love to see their hero in mortal danger.

I must confess, my leanings also sway towards this fascination. There is nothing that thrills me more than to read a good "Get-Kirk" story, as long as Kirk comes out alright in the end.

Rest assured, these type of stories are good for you. They allow us to come to terms with all those instinctive aggressions we keep trapped within us. The finest psychologists say these things every day, but those of us of the "Get-Kirk" persuasion knew it all along.

So relax, take heart... and enjoy. I sincerely hope you will derive as much pleasure in reading it as I did writing it. -- Beth

From the Author's Introduction for "A Time of Death, A Time of Life"

First of all, let me apologize to all who have been waiting patiently for this second printing (ALREADY?!? It's only been six months since the first printing came out!) to see the light of day. My life has been absolutely crazy in those six months and has probably changed as much as any one life can change during that span of time.

Among the things that have kept me running around like the proverbial chicken with its head cut off is writing and singing (WHO ME?!?) Trek songs for the local theater showing STAR TREK: THE MOTION PICTURE; releasing a tape of said songs; putting together a filk zine (The tape is available now; the filk zine should be out by late June. SASE to me for more info.); job and apartment hunting; and, to top everything off, getting a divorce (A basic case of two nice people not meant for each other.). Needless to say, life has not been dull. (Friends tell me my life is more exciting than a soap opera. I tend to agree.)

I won't prattle on forever. I just want to say thanks to all of you who have been patient and understanding with me these past few months. I couldn't have made it without you.

Now, at last, you can relax and enjoy. I have another zine to put together! (And if I may quote a dear friend — "This is INSANE!") Until next time... -- Jane

This forty-two page story, which occupies the first half of a two-story format (the second work is called 'A Matter of Survival'), details the plight of a gradually dying Enterprise after falling victim to a sneak attack by a renegade Romulan vessel. The author maintains a nice balance between the action/adventure of the primary plot (the struggles of the remaining grief-stricken crew in their efforts to wrest victory from the jaws of defeat), and the psychological theme (which is centered on Kirk( that deal's with one man's painful struggle to accept the responsibility for a command decision which led to devastation. The 'big three' are relatively well-drawn, although some may quarrel with the characterization of Kirk in the latter portion of the story, and find fault with the deus ex machina quality of the ending. All told, however, 'A Time of Death,' A Time of Life' has far more pluses than minuses to recommend it, with a fast-moving plot, character insight, and relationship well-represented. [1]