A 50-year Trekkie bestows Star Trek history upon the next generation: How fandom and fanfiction sparked the galaxy’s most controversial romance

A 50-year Trekkie bestows Star Trek history upon the next generation: How fandom and fanfiction sparked the galaxy’s most controversial romance is a 2018 article by Alissa Smith for the newspaper "Colorado Springs Independent." 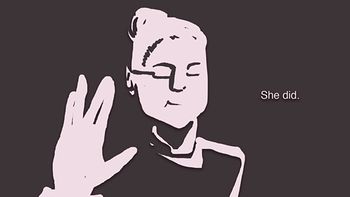 fan art by "equalopportunityenby" that accompanies the article

n 1966, my friend, who I’ll call “Dee,” was 26 years old, living in Oregon with two other young women, both in their early twenties. Dee’s family considered her a “spinster,” as she should have been married with kids by then, but Dee had no interest in finding a husband. She wanted a career in the medical field, to attend grad school and, more than anything, to write.

She belonged to a women’s science fiction writing group. Some of them had written professionally and others were hoping to get published (Dee among them), but as she said: “Science fiction in the 1960s was not considered the purview of women. So we would go to science fiction conventions and so on — it’s not fair to say we weren’t welcome — but there was very much a division, and the social attitudes at the time played a large role in just how participatory we thought we could be.”

But whether or not it was her purview, writing sci-fi was her passion, and it found an outlet in September of that year.

Not everyone remembers exactly where they were and what they were doing when Star Trek: The Original Series (TOS) aired for the first time, but Dee does. She was sitting on the floor of her living room, eyes glued to the small black-and-white TV she hardly ever used.

While society tended to regard sci-fi as juvenile, Dee said it was obvious from the beginning that Star Trek was not intended solely for kids. “These were well-developed characters, real plots that you could get into... It was startling, and I was absolutely riveted from that very first day.”

“We were just electrified,” Dee said, “because that was not the world we were living in, and that was the world we wanted to live in.” A world of equal treatment for all genders, where all the war and cultural upheaval that defined the ’60s was simply a part of humanity’s dark past. More than anything, Star Trek offered a glimpse of something neither Dee nor her friends had in their real lives: freedom.

As women, most of them married, Dee and her club-mates didn’t always have access to their own money, and often had to fish between couch cushions for change to pay babysitters so they could meet up, but Dee said it was always worth it to watch the show together.

Fanfiction, which amateur writers still produce widely today, takes many forms, and odds are if you can think of a movie, book, TV show or video game, you’ll find fanfiction for it. Many people write fanfiction in which two non-romantically involved characters get together. Some fanfiction tells new stories in episodic serials, like adding a mystery to the Sherlock Holmes universe. Other fanfiction (though not as much as people tend to assume) functions only as straight-up erotica. Some writers even pen fanfiction about real people (celebrities like actors and musicians). There are as many types of “fic” as there are writers of it.

“It would just pour out of me,” Dee said. “Adventures with the crew of the U.S.S. Enterprise, generally Uhura. Because I was already under pressure to get married and so on, and I wanted nothing to do with that, and it was just women being badass.”

She’d stay up until 2 or 3 in the morning on her typewriter, no matter if she had to work the next day. “It was kind of a ‘choose your own adventure.’”

Younger fans like myself tend to think that Dees only exist in whispered tales of “the old days,” passed down through largely abandoned message boards. While we all know original fans of TOS are still alive, of course, society feeds us a common lie that at some point you just “grow out” of the things you love. This belief causes many of us my age and older (and there are more of us than you might imagine) to feel ashamed of our favorite hobbies.

Why haven’t we “grown out” of this yet? Why do we have to?

But then came Dee, proof that we are never too old to love something; a living, kind, generous and enthusiastic example of the stories we’ve shared for decades, as excited about Star Trek now as she was in 1966. She represented a community we thought had faded away.

You see, Dee and women like her changed the way we as a society interact with media, and not just those of us who write fanfiction or create fan art. Trek conventions laid groundwork for fannish get-togethers of all kinds (from San Diego Comic Con to our own Denver Comic Con and GalaxyFest), and the letter-writing campaigns and protests that kept it on the air provided an example for modern movements like #renewB99, a hashtag that circulated on Twitter when Brooklyn 99 was canceled in May (and subsequently rescued by NBC). They formalized cosplay (costumes based on characters from various media), and even used their influence to raise money for charitable causes, as many fandoms do today.

And when it comes to transformative fandom — fanfiction and the like — Dee’s generation (particularly female fans of Star Trek and, believe it or not, Starsky and Hutch) didn’t just change everything. They created it.

I realized in that moment that I had received not only a stamp of approval, but also three whole dollars from a “Fandom Grandma,” one of the pioneers of modern fandom, one of the reasons we are able to write and publish fanfiction today. A trailblazer.

This open letter immediately took the Star Trek Tumblr community — my community — by storm, and spread to fandoms outside our own. As of this writing, it has nearly 14,000 notifications; for a personal post on an unknown blog, that’s basically going viral on Tumblr.

We’re past the days of authors like Anne Rice (The Vampire Chronicles) sending cease-and-desist orders to fanfiction writers, and the days of the censorship of queer love stories. We live in an era in which we can share our creations and enjoy the creations of others without leaving our homes.

Dee called AO3 a “candy store,” and said the fan art she has seen, in particular, has been overwhelming. “I cannot get over the art,” she said. “We would have jumped at this. I would’ve given my right tit for all this art when I was in my twenties. Because you couldn’t reproduce it, you couldn’t send it out, but [now] there’s this fabulous art coming out every single day.”

While not the only (or, possibly, oldest) blogger on Tumblr sharing fandom history, Dee became special to so many of us because she showed up and told us that she was here. That we weren’t alone. That we can love the things we love as long as they continue to bring us joy.

“All diehard fans,” Dee said, “we’ve all got some kind of Star Trek-shaped puzzle piece missing out of the inside of us, and the shape of that piece is different for all of us. Whether it’s past trauma or loneliness or no acceptance in society — whatever it is, I think we all come to it and it fills a certain need. Maybe several.”

This is what transformative fandom does. It offers a sense of community, an outlet for creativity, a way to explore traumas and personal issues through admirable and familiar characters. At least, that’s certainly part of my puzzle piece.

You might think it’s silly to make connections like this with people worlds away, based on one point of commonality. Star Trek is just a show, after all, and fanfiction is just a hobby. But if that’s true, then Dee and I were the same kind of silly. And I do miss her.

“What fun it has been to be a fan among fans again!” Dee wrote in her final open letter. “I feel so lucky to have discovered modern fandom and this community when I did. You have taught me so much. You’ve impressed me, moved me, made me laugh, and brought a whole lot of happiness to my days.

“I hope you know how honored I feel to have been embraced by you as your Fandom Grandma and your friend. ... Please, please keep fandom a place where we are welcoming to newcomers. Where we value each other, even if we don’t agree on specific ideas.

“And please go on enjoying fandom, as long as it is meaningful and positive for you. I hope many of you will be fandom grandparents to the generations that will follow! Please keep writing and creating art. Keep our traditions alive. I’m passing the torch of this historic fandom on to you now.”