Song of the Unwilling Bride

Song of the Unwilling Bride is a poem/filk by Leslie Fish. 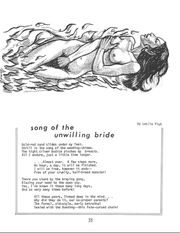 art by Leslie Fish in the zine Thrust 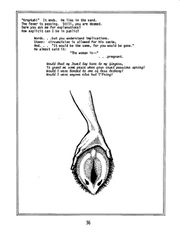 art by Leslie Fish in the zine Thrust

"I wrote “Song of the Unwilling Bride” simply because I hate two-dimensional characters, and wanted to give T’Pring a more detailed reason for rejecting Spock—and in a fashion likely to get him, or someone else, killed—than just the enigmatic “I did not wish to become the consort of a legend”. In another story — ”About the Size of It” — I gave her a funnier and raunchier, but just as logical, reason. [1]

"Leslie Fish's SONG OF THE UNWILLING BRIDE takes an outsider's point of view. (Unfortunately for this outsider, the Kirk/Spock relationship has been too much with her.) This elaborate poem postulates some new circumstances surrounding "Amok Time," and also provides certain (anatomical?) insights into Leslie's SHELTER and POSES."

I don't usually read filk, let alone review it. Eight years of analyzing poetry in school has left me with little taste for anything that isn't outstanding. However, this one should not be missed. It's not the poetry that makes this so compelling, but the story. It is a first person narrative of T'Pring during the ceremony in "Amok Time." It is a wonderful portrait of this character and the reasons for her actions. I highly recommend this poem. [2]