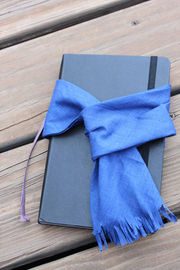 The scarf created by looshu for the Team Sherlock sketchbook.

A small sketch from spacedrunk to superjellyart, apologizing for the bleedthrough of their markers.

The Sherlock Sketchbook Project was a fanart project which started in 2011, based on BBC's Sherlock. The goal was to fill four sketchbooks with fanart, writing, and other fanworks by various fans, then auction off the completed books for charity. The contributors were to mail the sketchbooks to each other. The project was never completed, due to the sketchbooks being lost in the mail.

The Sherlock Sketchbook Project was the brainchild of Kihanna, post-hummus and kinosian, and it was to be a pan-fandom art project that included Sherlock fanartists from all over the world. The goal of this project was to fill four Moleskine sketchbooks with artwork and writing by selected individuals of the fandom. Once the project was completed, the sketchbooks were be auctioned off for charity.

Out of the many that applied, 99 artists were invited to take part in the project. Those taking part were split into four teams based on geographical location - Team Sherlock (SW and WC USA), Team John (Central and NE USA), Team Mycroft (NE USA, Canada, South America and one UK artist) and Team Moriarty (all other locations). The Moleskine sketchbooks would then be sent out one participant from each team, for them to fill out. Once the artist had completed their art, they would be given an address to send the sketchbook off to another participant, along with a laminated rulesheet and labelled padded envelope. Occasionally they were sent with notes from other participants, or small items - for example, looshu created a small blue scarf for the Sherlock sketchbook. Occasionally the artist would also decorate the envelope - spacedrunk wrote "have fun!" on the back of the John sketchbook envelope before sending it to superjellyart, and Dekuku drew stars all over the Moriarty sketchbook envelope when sending it to wasiteIves.

The content ranged from handwritten fanfiction and poems to fabric artwork and watercolors. In one instance, a short fic was written entirely in glow-in-the-dark paint. In another, a hole was cut in the centre of the page in order to see another art piece behind it.

The project had a few set rules:

In February 2012, the sketchbook for Team Mycroft went missing. A day after a new one had been bought, the old one was found and it continued the rounds.

By September 2012, all notebooks had gone missing, and the project soon died. The Sherlock Sketchbook Tumblr was taken offline in 2018.

Please note that the list of artists below is not exhaustive - since the main tumblr has been closed, the original list of participants has been lost.

(Editor's note: editor is still trying to recover many of the pages. See talk page.)

My rabbit Bluebell has gone missing - Can you help me find her? I know you don’t usually find lost animals, but pleas help, sir! She’s just vanished into thin air! Her hutch was locked last night and still is today, but Bluebell, my bunny, just isn’t there!

Please Mr Policeman, put your best man on it! Please do it sir, I just can’t quit! I must find Bluebell, or I fear I will go mad! Can’t Mister Sherlock Holmes find the rabbit stealing lad?

Mr Policeman, I hope you’ll take the case. I I just can’t stop worrying about her and all the dangers she’ll face. Please help me out - no-one will listen! I really must have her back - please say it’s your division!

With lots of love,

I knew this day would come.

I suppose I’ve been waiting for (well, dreading, to be honest) this day for a while. Waiting for the day he’d shuffle his short body into here and ask for the certificate. I really wasn’t ready for this.

Well, I was prepared. There’s been a copy with John’s name on for weeks, just sat on my desk. I could’ve picked it up and given it to him. Easy peasy. But I stalled. I said I needed time to order a new one. The lie was bitter in my mouth, but he swallowed it with ease.

That certificate is a pack of lies. How can I give it to him? How can I watch him crumble when I know the man who caused all this is still alive? Maybe a clue-

No. I promised Sherlock. I have to. I’m sorry, John.

Carved onto every brick in this cramped prison cell is the name of my dear brother. Many hours of toil by the man below me, I imagine, but not for his own benefit. A reminder. We both know it’s not the Bank of England that’s at stake here.

I sit in the plastic chair brought down from below. He circles me, recalling every detail of my body. We know each other well.He sits to my left, an eerie reminder of how we were all those years ago. No introductions are needed. I know what he wants, and he knows what I want.

So I tell him. I tell him of Sherlock, his history, his past. He sinks his claws into the story like a panther, tearing it apart with razor sharp teeth. I try omitting details, but he picks them up almost immediately, storing them away for some nefarious plot. Then it’s his turn.

He spins a wild, fantastical story, of codes and loopholes, and I can’t tell whether it’s true or false. It’s only when he taps against my leg that I pick up the lie. Partita Number One. The first song I taught Sherlock on his violin.

It tells me that all I’ve done is for naught - Moriarty wouldn’t tell me anything. I was too trusting of him. Old partnerships did not last with this man.

As I leave, he calls out to me, but I ignore him.

There is nothing more to say.

He stands in the door, surrounded by the light from the fluorescent light outside. He towers over me, but I’m not afraid. He still trusts me. He wouldn’t harm a hair on my head.

He gazes blankly at the carvings on the wall, and I know he undestands. This isn’t about money. It’s about Sherlock.

He sits in the plastic chair, and I immediately circle him, recalling all the details about him. Inch scar, left ear - from removing a tracker. Black hair with red undertones - he never liked being ginger.

I drop to sit by his legs, on his left, as we used to, and he automatically moves to accommodate me. He remembers, then. He knows.

He starts. All the history of Sherlock that I could ever need comes pouring out of his mouth like a waterfall, and although he tries to hide details, I get them in the end. In return, I tell him the lie I tell everyone - codes, loopholes and binary. I tap on his leg, but he recognizes the tune immediately. Of course he would. Partita Number One - first song he taught Sherlock, and the first song I taught him.

I smile. I never planned on telling him how I did it - it was so basic, even that idiot Anderson from Scotland Yard could do it. He knows this, and as he leaves, he ignores me as I try to call him back.

It’s a first - he could never ignore me at all before. But for now, anyway, he has nothing more to say.